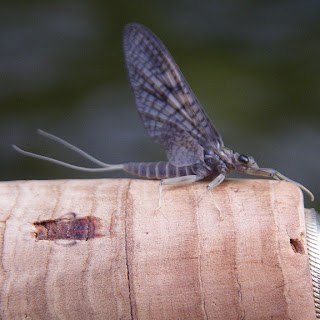 Photo: Artin Marootian
The hatch would shift in time and even location but it held enough onto tradition and we got into some action. Between the feeding frenzies we were spoiled by the amazing spring beauty and while smelling some flowers SFF guide Bernard Yin planted his face roughly two feet from a sizable rattler. "I never heard a flower like that!" As he adjusted his focus, he tells us, "All I saw were scales and huge diamonds" (as in Diamondback Rattlesnake). Luckily the only thing bitten were our flies. Pocket water hunting provided fish when the bugs were less active. Mayflies and numerous types of stoneflies were and are the predominant insect at this time. This river is truly an interesting game. What is this all about? We look for good weather but not so hot that the high country slopes start to melt. We then dash in and work hard at finding the hot zones. Upper Kings bows are strong and wild. A foot long fish is average but a few in the "teens" are always sprinkled in. Look at the bend on client Dave's rod... 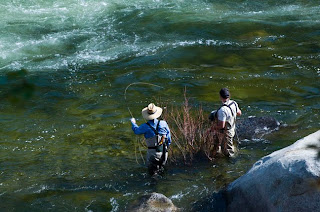 Photo: Andrew Maurer
Note that this is the catch and release section of this massive river and also remember that most streams are not open for fishing until the last Saturday in April. Don't be discouraged, just know the regs.

We have been blessed with great photographers. Last year Stephanie Skiff shot a multitude of great shots. Over the last few days we had the honor of guest photographer Andrew Maurer (see: http://www.troutstreamdesigns.com ) in our company. 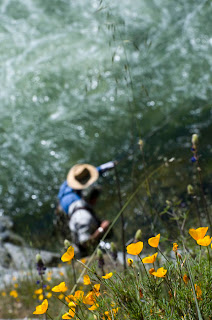 Photo: Andrew Maurer
The collective crew be they guides, clients or others crated a wonderful mix and camp every night was a great hang with food and laughter. Some of these shots are a sneak peek at Andrew's stellar work and look out for more photos very soon. For those of you in So. Cal. Jimmie and Bernard will be present at The Fishermen's Spot (April 8th). More of Andrew's photography, Stephanie's photography and even some exclusive 2010 helicopter footage of the drainage will be showcased. The conversation will be about Yosemite, The Kings, our Fall brown trout camp and mucho mas.

LATE BREAKING NEWS
April 1st UPDATE: The upper Kings continues to be fishable fish despite a "false alarm" on Weds./Thurs. that spring runoff might kick in. Suddenly a cool front curtailed the rise in flows and we're seriously considering heading back on the river! April Browns we call them (nudge nudge wink wink).

Contact us if you want to talk trout or we'll see you March 8th in the early evening at the Spot. Call Ken or Steve for details.
The Sierra Fly Fisher Team
Posted by Bernard Yin at 10:56 AM 1 comment: